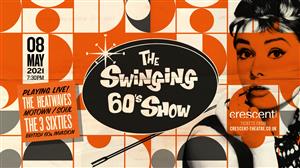 From the magical sounds of American soul and its fantastic girl groups, to the British invasion of The Beatles, Kinks and Rolling Stones, The Swinging Sixties Show will take you on a visual and musical journey through the iconic decade.

Opening with legendary foot tappers from the likes of Martha & The Vandellas and The Supremes, the glittering Heatwaves take to the stage with a bristling energy. Wowing the audience with their beautiful harmonies and wonderful choreography, this fabulous girl group instantly grab the crowd’s attention.

After the interval the show restarts with a bang as, suited & booted, The 3 Sixties take the show by storm. Electrifying the house with a salvo of hits from the likes of The Beatles, The Kinks, The Rolling Stones and more, The 3 Sixties deliver an enthralling tribute to the iconic British Invasion.