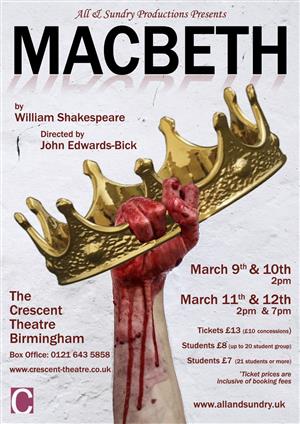 All & Sundry proudly present Shakespeare's masterpiece 'Macbeth'.
Often referred to as 'The Scottish Play' such is the curse of the mention of the tyrannical, brutal and paranoid King of Scotland as his obsession with power descends him into madness.

Acting upon the prophecy and encouraged by his wife, Macbeth slaughters King Duncan who at present resides on the throne and thus becomes King of Scotland fulfilling the prophecy.

Once upon the throne he becomes a paranoid, tyrannical ruler who’s forced to commit more and more murders as he descends into madness.

*£7.00 Student tickets available on for groups of 21 or more