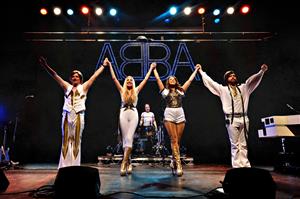 Remember the days of sequins, flares and platform boots?

Remember Waterloo, Mamma Mia, Take a Chance on Me, Super Trouper and many more?

Want to be taken back to a time when the airwaves were filled with their infamous harmonies and the dancefloor was moving to the music of Benny and Bjorn.

21st Century Abba recreates all the greatest hits of the Super Swedes. Using latest technologies combined with live musicians and wearing those costumes you know and love.

Taking you back to the decade where Abba ruled the world, having audiences cheering for more and leaving as Dancing Queens!