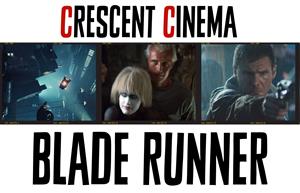 In May our film will be the sci-fi noir cult favorite adaptation of Phillip K. Dick’s ‘Do Androids dream of electric sheep’ : Blade Runner

In Los Angeles, 2019, Deckard is a Blade Runner, a cop who specializes in terminating replicants. Originally in retirement, he is forced to re-enter the force when four replicants escape from an off-world colony to Earth.