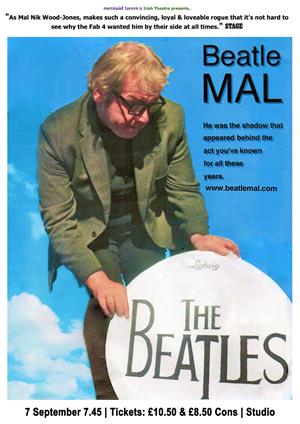 He was the shadow that appeared behind the act you've known
for all these years!

Show cancelled due to unforeseen circumstances

Mal Evans was the Beatles roadie, but he was also their closest friend, he toured the world with them, took part on their recording sessions and films. On the crazy ride that was Beatlemania, it's doubtful they would have survived without him!

Nik Wood-Jones brings the 5th, or was he the 6th Beatle?! Back to life in this touching & funny one-hander which premiered at the Cavern, Liverpool in 2012.

"As Mal Nik Wood-Jones, makes such a convincing, loyal & loveable rogue that it's not hard to see why the Fab 4 wanted him by their side at all times"
The STAGE