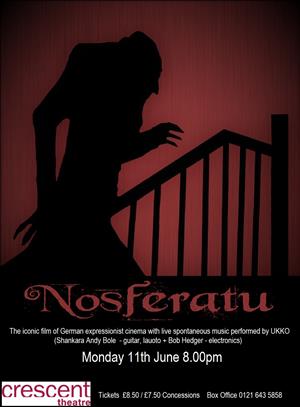 
Nosferatu, A Symphony of Horror is a 1922 German Expressionist horror film, directed by F. W. Murnau, starring Max Schreck as the vampire Count Orlok. The film, shot in 1921 and released in 1922, was an unauthorized adaptation of Bram Stoker's Dracula (1897). Various names and other details were changed from the novel: for instance, "vampire" became "Nosferatu" and "Count Dracula" became "Count Orlok".

Stoker's heirs sued over the adaptation, and a court ruling ordered that all copies of the film be destroyed. However, a few prints of Nosferatu survived, and the film came to be regarded as an influential masterpiece of cinema.

Here is the story of Dracula before it was buried alive in clichés, jokes, TV skits, cartoons and more than 30 other films. The film is in awe of its material. It seems to really believe in vampires. ...

It doesn’t scare us, it haunts us.