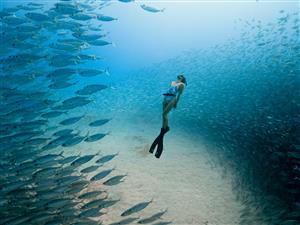 25 Sep in the Main House

Calling all ocean lovers! The annual Ocean Film Festival is sweeping towards Birmingham with a brand new selection of the world’s most amazing ocean films, from both above and below the surface.


Brought to you by the team behind the Banff Film Festival UK Tour, this collection of short films celebrates divers, paddlers, surfers and oceanographers who live for the sea’s salt spray. Be wowed at the mind blowing marine life; exhilarated by the power of the waves, and inspired by the characters who dedicate their lives to answering the call of the ocean.

Manry at Sea
In 1965, a seemingly typical middle-aged suburbanite in Cleveland, Ohio, threw caution to the wind and set sail on a solo voyage across the Atlantic, in a 13½ foot wooden boat called Tinkerbelle. Newspaperman Robert Manry’s goal was to sail from Falmouth in the US to Falmouth in the UK, and his 78-day epic journey will capture the hearts of ocean lovers, adventurers and dreamers alike.
(43 mins)

A Peace Within
Philip Gray is known as an extreme artist, having painted in locations such as Antarctica and deep in the Borneo rainforest, but painting underwater is his biggest challenge yet! The Peace Within joins Philip as he ventures below the surface to paint Mexico’s cenotes – astounding clear-water subterranean pools, viewed by the ancient Mayans as gateways to the afterlife.
(6 mins)

The Passage
In 1974, a small, free-spirited team built their own canoes, launched them into the Pacific, and became some the first people in modern history to canoe from Washington to Alaska up the Inside Passage. Nate and Ben Dappen grew up hearing tales of their mum, dad and uncle’s ground-breaking voyage and, in The Passage, continue the journey that has become part of their own identity. This is a coming of age story about families and the wild places that define us.
(24 mins)

A Place for Penguins
Years of overfishing have seen the number of African penguins plummet, with scientists warning they could be extinct by 2026. Enter the unlikely duo of scientist Christina Hagen and visual artist Roelf Daling, who are teaming up to take on an ambitious, novel and entirely unique project, demonstrating that science and art are not mutually exclusive, and that if we are going to meet the challenges facing our planet, we need to think outside the box…
(13 mins)

Surface
In a photographic niche defined by familiar angles, Ben Thouard is driven by his desire to create something original in surf photography, and his striking and unique half/half shots have captivated ocean photographers around the globe. Gain an insight into Ben’s love of his craft, his devotion to capturing ‘the shot’ and his stunning adopted homeland of Tahiti in this intriguing short film.
(7 mins)

Emocean (Tour Edit)
A love letter to the ocean from surfers, fishermen, marine scientists and people with a shared passion for the sea and how it makes them feel. This stunning film is a documentary with soul; a salty blend of stories by the eclectic assortment of people sharing tales of adventure, adrenaline, inspiration, love, loss and their relationship with the ocean.
(23 mins)

I am Fragile
This stunning short film showcases the spectacular landscapes and wildlife of the remote Arctic, creating a lasting visual message that will inspire all who watch it to protect this wild yet fragile region. Shot across 6,000km, from West Greenland to Canada, this is an ode to the spell-binding frozen north.
(3 mins)

Surfer Dan
Sun, sea and sand typically come to mind when you think about surfing, but this is not your typical surf film. Landlocked ocean-lover Dan Schetter lives on the shores of Lake Superior in Michigan where, in winter, strong winds across the water create deadly currents, icebergs and… waves. Known for being the crazy guy with an icy beard who catches waves in January, this is Dan’s story.
(8 mins)

Forever
Imagine waiting for four years for the perfect conditions to create a ‘painting’ – only for it to be washed away as soon as it’s finished! Cornwall-based painter Tony Plant creates spectacular beach works of art (tide and weather permitting), and they only last for a few hours. Forever tells the story of one of these unique creations.
(3 mins)