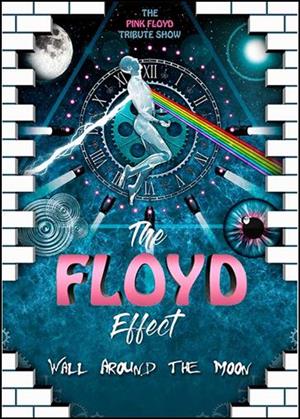 22 Feb in the Main House

This production contains stroboscopic lighting effects and Suitable for ages 14+.

There are tribute bands and then there are tribute bands... With members who have worked with the likes of David Bowie, Janet Jackson, Jon Bon Jovi, Brian Adams and Keith Emerson, and others who have performed on Broadway and in the Royal Albert Hall, The Floyd Effect isn’t just a bunch of enthusiasts who love the music of Pink Floyd, it’s a band of the highest calibre that loves the music of Pink Floyd.


Pink Floyd’s recording career spanned almost three decades and, for its 2019 tour, The Floyd Effect has chosen two of their most remarkable albums to create its Wall Around The Moon tour. Forty years after its release, The Wall (1979) remains a classic of the genre, and the band will be spotlighting this together with a complete, unbroken performance of the iconic Dark Side Of The Moon (1973) – two albums that between them have sold 75 million copies worldwide. The concert will also include tracks from albums such as Wish You Were Here, Animals and The Division Bell, delighting fans everywhere.

Rightly renowned for the remarkable accuracy with which it performs the Pink Floyd canon The Floyd Effect faithfully recreates the music and intensity of a Pink Floyd concert without recourse to backing tracks, racks of computers, or other technological wizardry. Every note that you hear is played and sung by the band, making this a genuine ‘live’ event; powerful and emotional. And, of course, the music is supported by a dramatic light show. Completely revamped during 2018, this incorporates the iconic circular screen together with two sets of projections, smoke and lasers, all upgraded to make the show a truly immersive experience.

Sit back and enjoy The Floyd Effect as the band takes you on a journey through the music of Pink Floyd. Unless you were there the first time around, it was never as real as this.