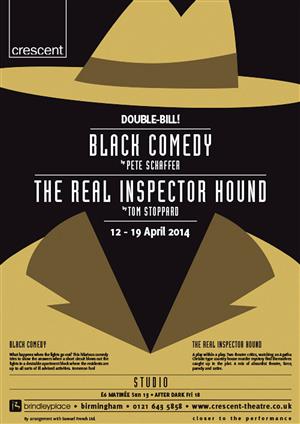 What happens when the lights go out? This hilarious comedy tries to show the answers when a short circuit blows out the lights in a desirable apartment block where the residents are up to all sorts of ill advised activities. Immense fun.

A play within a play. Two theatre critics, watching an Agatha Christie type country house murder mystery find themselves caught up in the plot. A mix of absurdest theatre, farce, parody and satire.

"Both productions were so enjoyable and funny. They both relied on timing and the cast in both shows got this spot on. The standard of acting was high and the flow of each production was smooth. Well done to the directors too. If you need cheering up go and see it, if you don't, go and see it! The comic timing was excellent and well choreographed." Anon

"I loved this production of The Real Inspector Hound. I have not been to see a play for a long time and I really enjoyed it. The acting was of a very high standard and the comic timing was excellent. I loved it. I enjoyed the twist in the play, which was done so well."