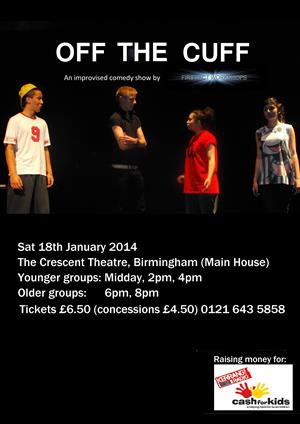 First Act Workshops is an acting training ground and casting centre for young people in the West Midlands.


They put on theatrical performances, produce short films and many of their members are cast in high profile theatre, TV and film productions, including BBC 2's Line of Duty, Nativity 2, The Skills Show and the new Channel 4 series 'Raised by Wolves'.
On Saturday the 18th of January 2014, the young actors from the workshop will be performing 'Off the Cuff' - an improvised comedy show - in aid of Kerrang! Radio's Cash for Kids Charity.

Ross Simpson of First Act Workshops said "We look forward to working with The Crescent Theatre for a second time as they help us raise funds for Kerrang's Cash for Kids, who help local disadvantaged children''.