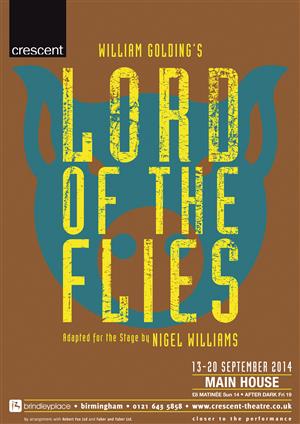 Lord of the Flies

by William Golding Adapted for the stage by Nigel Williams

There will be an After Dark discussion following the 19:30 performance on Fri, 19th Sep. Free to ticket holders.

A group of British school boys are stranded on a desert island and try to govern themselves. Inevitably they degenerate into savages. Based on the novel 'Lord of The Flies' by William Golding

Watch our trailer here: https: Lord of the Flies Trailer

suitable for age 13 and above, contains scenes of a strong nature
please note this performance contains strobe lighting

"The show was really good - much better than I anticipated. I was apprehensive about seeing a show with this particular subject matter I thought everything had been handled in a very good way and the acting was superb. It did not feel like 2 hours in there! Being a costume person in theatre myself, I was very impressed with the costumes. I was so engrossed in the play I didn't notice the costume changes which I normally look our for." Anon

"I want to congratulate the cast on a mesmerising, fantastic brutal and energetic adaption of Lord Of The Flies! Full marks to the young cast and in particular manic Roger (?) who gave a masterclass in method acting! Well done!"

"Having read the book as a class reader at school in 1970, my memory of the book remained. So given the chance to see the play at the Crescent Theatre was quite a thrill. I was not disappointed by either the acting, direction or venue. The actor playing the deranged school boy was particularly good, so much so, I think he needs therapy it was so true to the part he played - well done! It is difficult to find anything to criticize [sic] - it was all good - captivating, thought provoking so true of the human reaction in these circumstances and human life." Anon

"This is a production that could divide audiences with some difficult scenes and themes to direct and explore. A lot of physical theatre was used to demonstrate the decline of young boys into savages which meant for a highly charged and incredibly energetic performance. Great performances from those playing Simon and Piggy - both challenging parts; some rather astounding pig noises from Roger who’s feral nature was apparent and extremely realistic from the beginning and commanding portrayals by Ralph and Jack allowed this production to challenge, engage and entertain the audience." Anon

"We saw LOTF at THE CRESCENT THEATRE in B’ham yesterday afternoon – brilliant as ever yet very disturbing as it should be. Congrats and well done one and all and keep up good work." I.P.