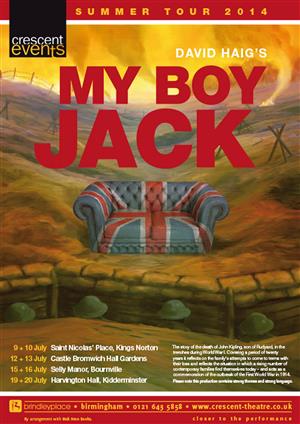 
Kipling's determination that his son, Jack should be an officer in WW1 and the subsequent affect when Jack goes missing in action and is later declared killed in action.

"The cast battled very well against the twin difficulties of a strong wind & aircraft noise. The setting was good & the cast adapted very well. The play was very well written which provoked serious thought.It was extremely well acted & produced under difficult circumstances. Enjoyed may not be the right word for this play. The actors conveyed the tensions between the characters very well. The scene in the trench was particularly well done. It was a very satisfying experience." Anon

"Firstly, I want to say thank you for a really excellent evening. I've recently read "Voices of the Somme", and this production truly captured the horror of what these young men and boys experienced, and the dreadful waste of so many young lives. The dramatic tension was heightened by the intimate venue of St Nicolas Place. I'm ashamed to say that I have never visited the Crescent Theatre or seen one of your productions before. However, I have already put Lord of the Flies in the diary." S.C.

"The production was fantastic and the venue really added something to the performance. There was something quite moving and poignant having it inside the church. The actors were just superb, the play relied on their individual performances being excellent and they were. The play really got across the sentiments shared by many before and during the war. The idea of patriotism to the extreme and the performances were very moving. With 100 years since the outbreak of WWI, this is a play that I would highly recommend to anyone." Anon

"Wow, what a powerful and thought provoking play, respectively adapted for tonight's church setting. Another excellent Crescent production. Make time to see it if you can!" A.H.

"The production was stunning: the quality of acting was superb throughout. Tight direction made every moment count, and I felt totally absorbed within the drama unfolding just a few feet away. All aspects of the production (sound, costume, props) were of very high quality and enhanced the authenticity of the production. St. Nicholas's Church in King's Norton was a beautiful and appropriate setting for such a moving and intimate experience. The emotional commitment of each and every one of the actors to their role made the production utterly compelling at all times." Anon.