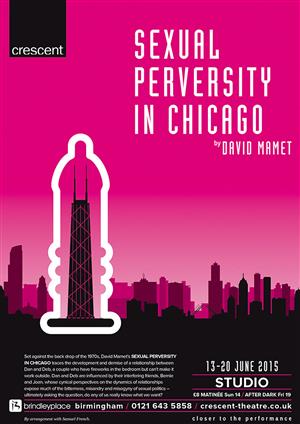 There will be an After Dark discussion following the 19:45 performance on Fri, 19th Jun. Free to ticket holders.

Set against the back drop of the 1970s, David Mamet’s Sexual Perversity in Chicago
traces the development and demise of a relationship between Dan and Deb, a couple who have fireworks in the bedroom but can’t make it work outside. Dan and Deb are influenced by their interfering friends, Bernie and Joan, whose cynical perspectives on the dynamics of relationships expose much of the bitterness, misandry and misogyny of sexual politics - ultimately asking the question, do any of us really know what we want?


A bleak, honest, brutally funny exploration of the ‘dirty joke’ that is the ‘godforsaken business’ of modern love and relationships.

Please note this performance contains themes of adult and sexual nature, and is not suitable under 16s