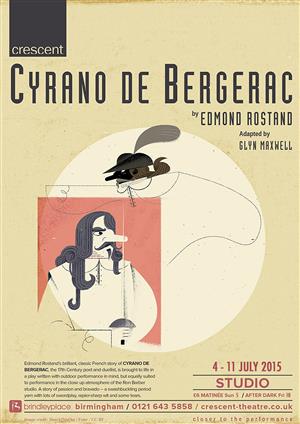 Edmond Rostand’s brilliant, classic French story of Cyrano de Bergerac, the 17th Century poet and duellist, is brought to life in a play written with outdoor performance in mind, but equally suited to performance in the close up atmosphere of the Ron Barber studio.


A story of passion and bravado - a swashbuckling period yarn with lots of swordplay, rapier-sharp wit and some tears.

Perfect entertainment for an open air performance at one of our tour venues, or up close in the intimate atmosphere of the Ron Barber Studio.

“Have seen a couple of performances at The Crescent and thought this was stunning! Just a wonderful night out! The cast performed so well! Hannah Kelly was a beautiful Roxanne. I loved the nuns who cleverly changed characters with exciting and impressive effect. However James Knapp as Cyrano was a stand out. Although an amateur production, he gave a professional performance full of laugh out loud comedy and moments of touching application, stunning performance. Am looking forward to seeing it on tour!” Anon

“Watched this for the second time and it is getting better and better. Superb performances from James David Knapp and Hannah Kelly. Must also make special mention of Tamsen Oatey, Les Stringer and Alan Bull. Whole ensemble pulled off a production that had me laughing and crying. The ending is phenomenal. Well done to all.” KK

“From the set ,to the concept, to the performances, a great production and well worth seeing. It will be interesting to see how it's going to be done outdoors and judging by previous years it's not to be missed! The humour worked so well in this play and there were so many contrasts which added to the production including that of Cyranos costume and the ending (I'm not going to spoil it, you'll just have to go along and see it!).” Anon

“Cyrano was portrayed brilliantly..I wanted to hug him but the whole cast was great” Anon

“On entering the Studio I thought I had entered the wardrobe department that they had just put a fire out on, by mistake, but no, this was the set for Cyrano de Bergerac. Smoke and costumes hanging in the air. A change from the norm in this production, its a very fast pace comical play, blink, and you could miss a lot of the punch lines. The entrances and exits were cleverly done a lot of times by going through the middle of the costumes hanging on a mobile clothes rail. Either side of the stage area. Great idea. The whole production was superb. Brilliant casting of actors, and stage direction. Very good Lighting and sound to compliment the production also. This is one of those shows that you think you might like to see but always put it off. DONT DO THAT!!!!!! You will certainly get your moneys worth from this play, and may be talking about it for weeks to come with others that may have missed a great show.” CW

"Incredible performance this afternoon from the cast of Cyrano. I must say the stand out performances must go to James David and Hannah Kelly, the final moved me to tears. Brilliant performances all round though, and the Boyfriend loved it too! Good date on my part if I do say so myself, thank you for the brilliant show" - R.W.

"I thoroughly enjoyed Cyrano this afternoon, a very funny and heart warming production. I think I must of got some smoke in my eyes though, as I was quite tearey at the end!" - R.C.

"Hello all. Just watched Cyrano and it was great fun... Thank you all for a cracking afternoon. Highly recommended." - V.C.