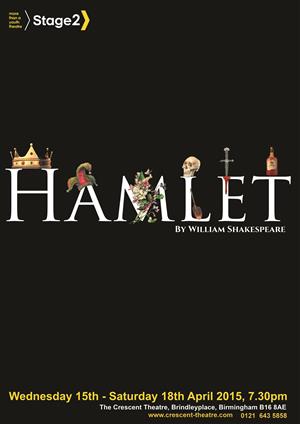 Shakespeare’s Hamlet is probably the most famous play in the world and over its 400 year history has been interpreted in thousands of different ways on stage and screen. Stage2 has a long established history of presenting award-winning 5 star Shakespeares that are clear and accessible to all ages and all levels of experience. As usual we have plenty of twists and concepts to provoke discussion and debate….


‘If this production had found itself at Stratford rather than The Crescent it would not have looked out of place. It is that good’. Behind the Arras on Stage 2’s The Tempest 2013

Hamlet and his beloved father were inseparable - the teenage Prince was schooled to rule in tandem, then take over when ready. Gertrude was excluded from their plans and pacts.
(She began to look elsewhere…)

Laertes was taught discipline and leadership by his ambitious father Polonius, with a clear path to the highest ranks of the military. Ophelia, vulnerable and motherless, is of little interest to their father
(until finally she becomes useful…).

Claudius’ daughters Rosencrantz and Guildenstern were brought up with Hamlet but their relationship deteriorates badly. Rosencrantz is given the ultimate opportunity to take revenge
(is she her father’s daughter…?)

There may also be, or not be, other bits you recognise…

Please note this play will run at approx 3 hours including interval.