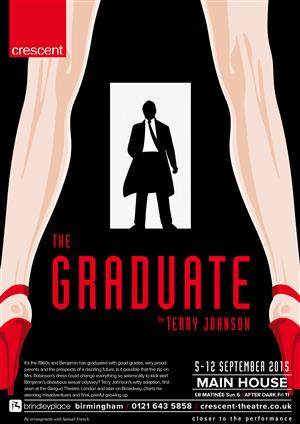 “The Graduate” first caught attention as a best selling novel by Charles Webb. It then hit the headlines as the hugely successful film that catapulted the unknown Dustin Hofmann into stardom. Then in April 2000 a stage version opened in the Gielgud Theatre, Shaftesbury Avenue and caused a theatrical sensation.


It’s 1967 and Benjamin has graduated with good grades, very proud parents and the prospects of a dazzling future. Is it possible that the zip on Mrs Robinson’s dress could change everything so seismically and kick start Benjamin’s disastrous sexual odyssey? Terry Johnson’s witty adaption, first seen at the Gielgud Theatre, London and later on Broadway, charts his alarming misadventures and final, painful growing up.

The perfect opening to our new season.


Contains scenes of a sexual nature, nudity, and use of herbal cigarettes

To book School/Group tickets please telephone Box Office on 0121 643 5858 between 10am and 7pm Monday to Saturday.