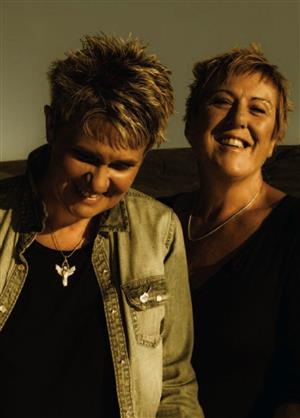 Chris While & Julie Matthews are breathtaking singers, songwriters, musicians and performers whose energy and commitment to their craft and their audience is boundless. They have been hailed the best and most hard working acoustic duo on the folk roots scene.


Chris While and Julie Matthews’ musical partnership began in 1994 when they were key members of influential folk super-group The Albion Band. In 1997 they left the band to concentrate on their work as a duo, which has seen them tour throughout the world and gain an ever growing, devoted fan-base. Their songs have been covered by a range of artists including Mary Black, Barbara Dickson, Christine Collister and Fairport Convention.

Both are multi-instrumentalists - Julie plays guitar, piano, ukulele, bouzouki, mandolin, harmonica and accordion and Chris plays guitar, bodhran, banjo, dulcimer and percussion – but it is the union of their two voices and skill as close harmony singers that continues to define their sound. Their musical careers have produced successful solo albums and a variety of projects away from the duo including St Agnes Fountain with David Hughes and Fairport Convention’s Chris Leslie. Now in its thirteenth year and with several albums to its name, the St Agnes Fountain Christmas Tour continues to sell out every year.

Described by fRoots as awesomely talented, Julie was a key songwriter for the Sony Award winning Radio Ballads, made for BBC Radio 2 in 2006 and 2012 and is currently writing for the next series, The Ballads Of The Great War, which will tell the story of WWI through the words of the people who were there and songs based on their experiences.

Of Chris, the Guardian wrote she rises like an angel from the ashes with a voice to match and one fan, Eddi Reader, describes her simply as the best singer in England. Last year, she was invited by Beth Nielsen Chapman to be a part of an all-star singer-songwriter concert at her house in Nashville alongside Gretchen Peters, Kim Carnes, Kim Richey and many more. The concert was filmed for a BBC Four documentary presented by Bob Harris and is due to be broadcast as part of the BBC’s Nashville season in November 2014.

"These women far outclass their many famous American cousins, and prove just how immediate and powerful well-written and performed music can still be. Aweinspiring" Dirty Linen

While and Matthews will be touring Australia throughout March and April and the UK in the Summer and Autumn. Tour dates and other details at www.whileandmatthews.co.uk
Twitter @whilematthews
Facebook Chris While and Julie Matthews