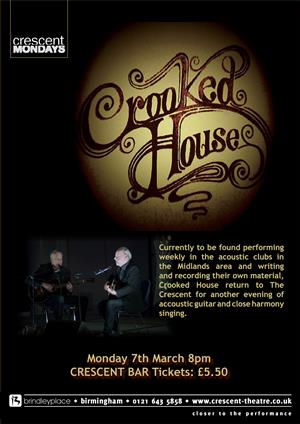 Currently to be found performing weekly in the acoustic clubs in the Midlands area and writing and recording their own Material, Crooked House return to The Crescent for another evening of accoustic guitar and close harmony singing. The duo released their first Eponymous Album in 2014.


Mick Burrows and Richard Gibbons met at a Wolverhampton acoustic music club around 2011 and discovered a mutual respect and admiration which continues to grow.

First playing as a duo in December of 2013 they have performed many gigs to date, notably the Perth Amber festival, The Crescent Theatre and even a house concert in Switzerland! They have supported artists like Ken and Ruth Powell, Gilmore and Roberts, and Scott Matthews.

Crooked House have had an original song (London Leaves) played on BBC Radio and are about to take part in the Area finals of the OPENMIC UK 2015 competition, having recently won through the regional finals from the 10,000 that auditioned.


Mick Burrows is an Acoustic singer songwriter from Wolverhampton in the West Midlands who has been playing and singing since 1972, both solo and in various bands. His influences include: The Beatles, Neil Young, Crosby, Stills and Nash. Mick's life changed when a friend at school introduced him to the music of a bloke called Bob Dylan at age 14!

Richard Gibbons is an Acoustic singer songwriter from Dudley in the West Midlands, now living in Wolverhampton, who has been playing and singing since 1975. Richard started performing live in 1989 aged 25 and appeared in several bands between 1989 and 2004 and his influences include Bob Dylan, Paul Simon and Rufus Wainwright.


Their name is inspired by a lyric from one of their songs, Little English Girl.