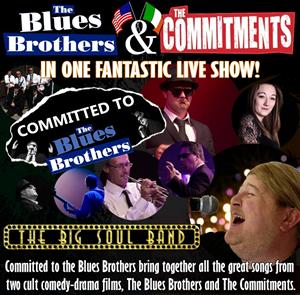 Committed to the Blues Brothers

11 Nov in the Main House

Taking the greatest songs from two cult films, 'The Commitments' and 'The Blues Brothers', this show puts them together to create two fantastic tribute shows in one memorable evening of foot tapping, sing along entertainment.


The band is fronted by Richard Alcock and Ritchie Hicks who have been performing their tribute to the Blues Brothers since 2003, and having performed in many theatres across the UK in 2015, the boys tour again now supported by a The Big Soul Band, which includes some members who have played with famous artists including Ali Campbell (UB40), The Brian Williamson Big Band, Mick Hucknall (Simply Red) and The Supremes.

In a show suitable for all ages, you can expect to hear some of the greatest Soul songs from the two films in an evening where you will not only be taken back musically but visually too, with some of those great scenes from the films, lots of laughs, plenty of crowd participation, and a night not to be missed, so put on your pork pie hats and dark glasses and join us for a night to remember.

See the band in action: www.bluesbroscommitments.co.uk