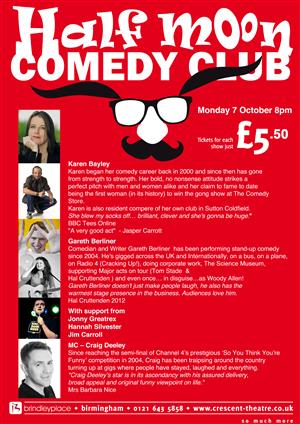 The Crescent Theatre's semi-regular comedy is back with another fabulous line-up.

Karen began her comedy career back in 2000 and since then has gone from strength to strength. Her bold, no nonsense attitude strikes a perfect pitch with men and women alike and her claim to fame to date being the first woman (in its history) to win the gong show at The Comedy Store.
Karen is also resident compere of her own club in Sutton Coldfield.

Comedian and Writer Gareth Berliner has been performing stand-up comedy since 2004. He's gigged across the UK and Internationally, on a bus, on a plane, on Radio 4 (Cracking Up!), doing corporate work, The Science Museum, supporting Major acts on tour (Tom Stade & Hal Cruttenden ) and even once… in disguise…as Woody Allen!

Since reaching the semi-final of Channel 4’s prestigious ‘So You Think You’re Funny’ competition in 2004, Craig has been traipsing around the country turning up at gigs where people have stayed, laughed and everything.

Craig Deeley’s star is in its ascendancy with his assured delivery, broad appeal and original funny viewpoint on life. - Mrs Barbara Nice