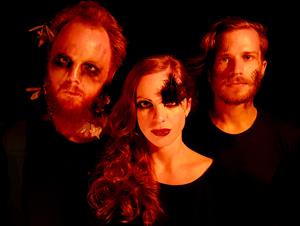 Following the hugely successful UK tour throughout the Autumn, Bristol four-piece Heg & The Wolf Chorus are back on the road in October and November 2017 performing their acclaimed debut album Raising The Fires.


The band perform the album's enchanting story of a witch who was wrongfully burnt at the stake. The scorned woman casts a spell, ending the world as we know it and conjuring all the mythological creatures back to roam the Earth. Inspired by traditional Scottish folklore and written at the foothills of the Cuillin mountains on the Isle of Skye, the vivid imagery and magnificent landscapes can be heard in every spine-tingling song.

Raising The Fires is a concept album taking the listener on a breath-taking journey into Heg's imaginative story, which weaves it's way through each unique and exciting track.
The band released Raising The Fires fresh from a sell-out full-scale theatrical album launch in Bristol as well as a showcase at English Folk Expo and a summer of festivals, including their debut at Cambridge Folk Festival. 2016 also saw the band invited to play at the sell out Troubadour Folk Club 50th Anniversary Concert at St George's, Bristol, hosted by Ian Anderson of fRoots magazine. The band played alongside folk legends Steve Tilston, Jim Moray, Three Cane Whale and many more.

This release presents the band's distinctive sound and Heg's visionary songwriting on a scale unlike anything they have released before, bringing theatrical elements to their performance with a strong story-telling theme throughout.