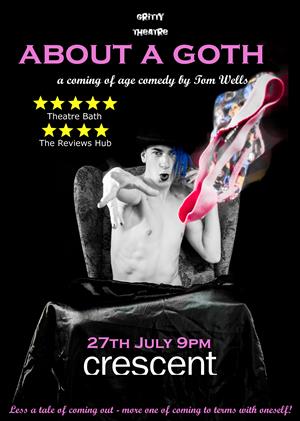 27 Jul in the Studio

A somewhat raucous, most definitely rude comedy about the inevitable trials and tribulations of being 17, a Goth, and gay in the 21st Century.

Nick’s hilarious misadventures get him into all sorts of sticky situations. It is only when something unforeseen happens at the old people’s home where he (reluctantly) works part time does he realise that there is more to life than lip-synching to Céline Dion, sipping from half-drunk bottles of mead and yearning for oblivion.

Warning: contains (bad) dancing to the Sugar Babes, partial nudity, a brief reference to Geri Halliwell and a Starbucks Mint Frappucino (well, it’s the most Goth thing that they serve!)