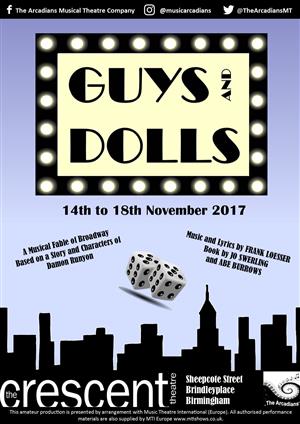 Guys & Dolls takes you back to New York of the 1930s – a world populated by eccentrics, gamblers, and nightclub singers. It’s a world where a high-rolling gambler tries to seduce a straight-laced Salvation Army girl for a bet, and where a faded showgirl tries to hook her fiancé of 14 years, who happens to be the founder of “The oldest established, floating crap game in New York.”


Jam-packed with comedy and well-known songs like I’ve Never Been in Love Before, Luck be a Lady and Sit Down You’re Rockin’ the Boat, it’s no surprise that Guys & Dolls won the Tony award for Best Musical, and was called “The greatest of all American musicals” by Time magazine.