Auditions listed below for:

Want to be involved but don’t want to act? There’s always plenty to do backstage – see our membership page for details.

Non-members are welcome but please read the notes on this page.

Membership Commitment – as part of your membership we expect all members to support the theatre by assisting with our Front of House Operations when the theatre is open for performances by either Stewarding, working on the Bar or Coffee Bar. We term this as a “Duty” and members are expected to do ten “Duties” per membership year.

The Crescent Theatre is committed to the promotion of equal opportunities within the theatre, and affiliated projects, through the way we manage the venue and provide services to the community. No person should experience discrimination or lack of opportunities on the grounds of gender, race, religion, age, sexual orientation or disability. In the provision of services and in regards to the membership and visiting companies, the Crescent Theatre is committed to promoting equal opportunities for everyone.  Click here for our Statement of Commitment on Equality, Diversity and Inclusion.

While auditions are intended for members, non-members are welcome to attend on the understanding that, if successful in reading for a part, you would be expected to become a member of the theatre. This entitles you to take part in all theatre activities and to concessionary ticket prices. In return you will be expected to attend all rehearsals and performances and to undertake your required allocation of front of house duties. Your membership subscription must be paid by the end of the second rehearsal. Membership fees for a year are £60 (£25 if unwaged). More details on Crescent Membership can be found in the membership pages.

Unless stated otherwise, the venue for all readings and auditions is the Crescent Theatre.

A Number was first performed at the Royal Court Theatre in 2002. It is on one level a play about human cloning and the questions it raises for us relating to identity, existence, relationships and security. It is, at a deeper level, a play about the vulnerability and power dynamics of love. It is a masterpiece of writing which poses unanswerable questions, pushing us to the edges of our moral understanding.

The play is written for two actors.

Actor one plays SALTER, a man in his early sixties.

Actor two plays his sons. There are three sons:

While there are two actors, I perceive that there are six characters. There are three sons and there are three versions of Salter, who is essentially a different father to each son. This will require actors to be highly adaptive and to cope with extremely fast changes of character within a highly paced narrative.

Auditions
Recalls if required on Wednesday 1 December at 7pm
Rehearsals commence Sunday 5th December and then on Tuesdays, Fridays and Sundays am [apart from: Sunday/Mon/Wed w/c 19/12/21;   Tues/Wed/Fri w/c 2/1/22; dates tbc for tech and dress week]

Audition pieces are posted below: 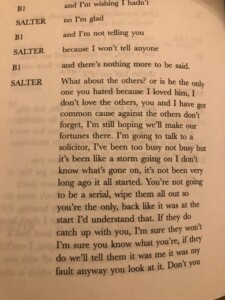 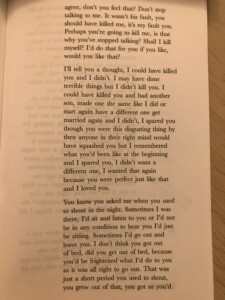 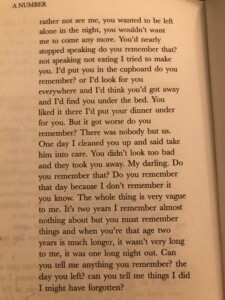 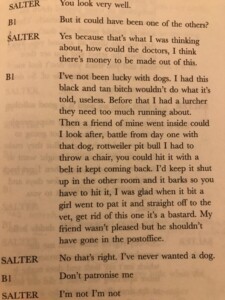 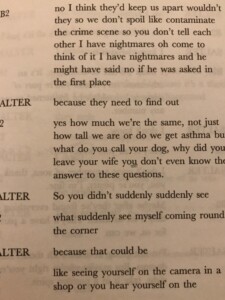 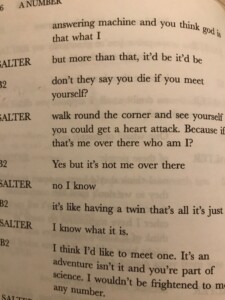 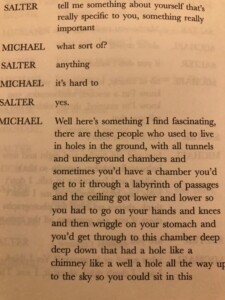 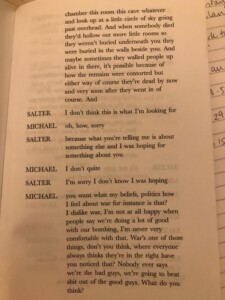 Swallow is a passionate, painful and playful play that takes a long hard look at the extremes of everyday life. It’s funny, hauntingly lyrical in places and feels very relevant and real in what it has to say about 21 st century life.

The playwright Stef Smith writes this in her foreword with to the published script: ‘The first draft of the play was written quickly and intensely, it just poured out onto the page. It was a play born of absolute anger and anxiety that the world wasn’t the place I felt it could be…I’ve never doubted that we all wrestle with the chaos of deep, dark, hard things. We behave badly, drink too much, sleep too little, punch walls or pull our bodies apart. Rarely are we given the healthy tools that enable us to deal with this chaos. And yet, and yet, deal with it we do – we still get up the next day. And that’s one of the main things that Swallow looks at – the chaotic ways in which we continue.’

Swallow is a great play for three actors. You need to be comfortable with being onstage continuously for an hour. With no set. But with some great lines, characters, relationships and situations. Most things worth doing should scare you a bit. Be brave and come and audition.

All are described as being in their thirties or forties. They could be a bit older or a bit younger than that. They’re not late teens and they’re not in their sixties or older. I’m open to any playing ages in between.

The sections below give an idea of each character and of the play. Further pieces will be provided at the audition. Just bring yourself.

If you have any questions, or you’re unable to make either of the auditions, please get in
touch.